A Culture of Safety: Building a work environment where people can think, collaborate, and innovate, by Alla Weinberg, is a very good read of the very very basics of building safety (physical, emotional psychological) in the workplace.

It is short. When they say on the cover it’s a 30 minute read they are not kidding you. The book is 62 pages. You can read it between meetings and still finish it in a day.

If you’re not familiar with the concepts of physical, emotional, and psychological safety as precursors to communication and collaboration, this book might not be compelling enough to convince you to pursue changing your behavior. Crucial Conversations or Radical Candor or one of the other big names in this topic line might be better for convincing the person with huge communication issues that they, in fact, have huge communication issues.

But I find Crucial Conversations is better for specifically conversations and tbqh I got nothing from Radical Candor except an emotional breakdown by trying to follow it. A Culture of Safety is much more down to earth (much less “my-bad-worker-left-and-started-a-coffee-shop silicon valley”).

This book would make a great companion to Burnout: The Secret to Unlocking the Stress Cycle if you were the manager of a burned out team (and especially if you were burned out yourself).

A Culture of Safety is technically aimed at managers, but many of the activities and directions can be approached successfullyby anyone who facilitates one or more regular meetings.

I’m not a big fan of “activities” in self-help books because so many of the popular books seem to delight in suggesting the kinds of activities that make my introverted thrice-burnt-out neuroatypical brain want to crawl under the desk. The activities in this book are not like those.

The activities in this book, for the most part, are light touch. “Ask everyone how they’re feeling at the beginning of a meeting” or “schedule a venting day when people can sign up to just go off about something bothering them and your job is to listen and understand.”  These are things that I can do as a product designer just as well as a people manager can. And because I’m a designer, the people on my team generally won’t even know I’m doing it to foster a culture of safety, they’ll just think it’s one of my quirks. I like that.

Y’all, I just finished uploading my talk, Decide to give a damn: an alphabet of accessibility to Button and I’m super excited about it. This is probably the best version of this talk yet — and I’ve been giving this talk to some pretty solid acclaim since 2017.

Registration is still open, and the conference is fully remote! It even takes time zones into account! Join me at Button this fall for the product content event of the year. On October 21-23rd, all of your favorite content and design nerds will be gathered for conversation, community, and fun! Check out the program and register today https://www.buttonconf.com/program

Am I Overthinking This? is a delightful book of 101 infographics. In the introduction, Michelle Rial explains that she was an information graphic designer whose chronic pain removed her from the field… and that this was her response.

This is the perfect coffee table book for the introverted UX designer who thinks way too hard about the little things, like:

Michelle uses everything from water colors to markers to hair ties, matches, and Chinese food take-out boxes to create the info graphics that are in the book.

For example, here’s “Are people judging me by my desk?” 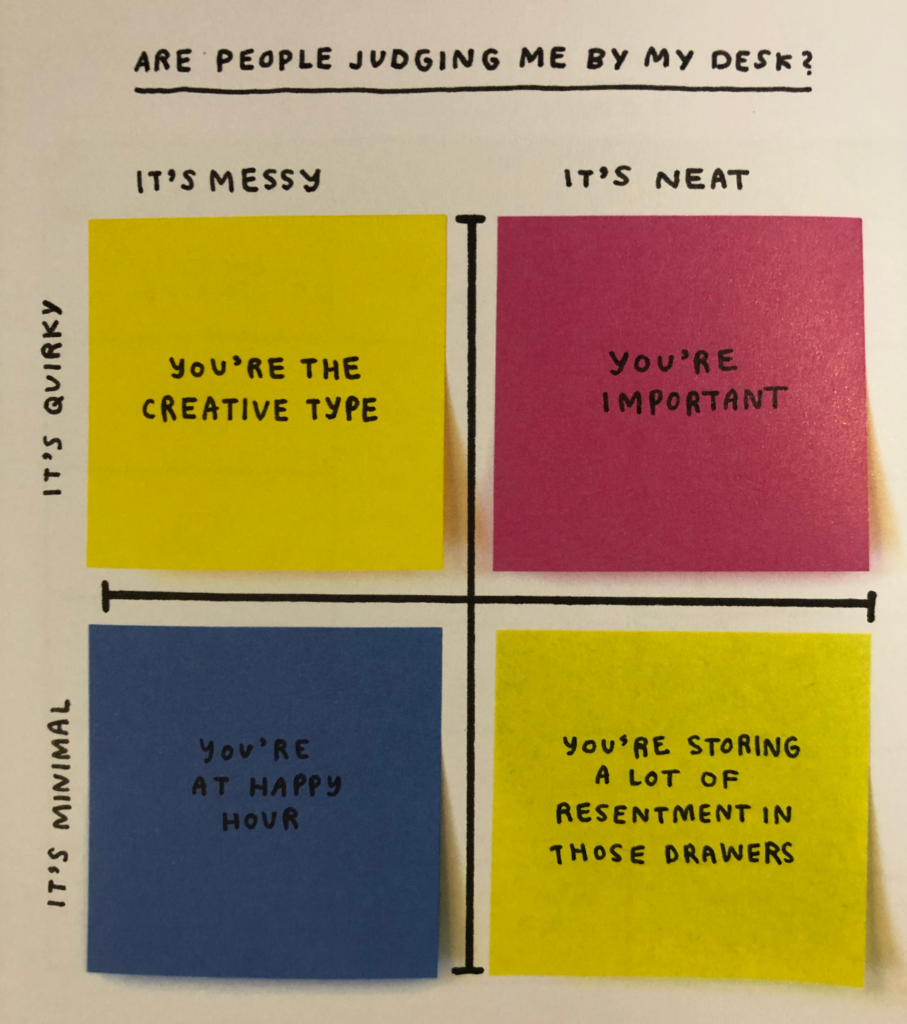 If you are an overthinker, or you are an information designer, or you just like charts (or you know anyone who fits any of these combinations) this is a book worth buying. I foresee using it to hand out “advice” to many of my friends in the future.