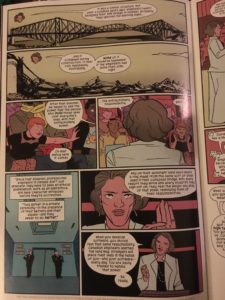 Panel 1: picture of a bridge.
Professor: It was a similar situation, but over a hundred years ago: engineers hadn’t designed their new bridge in Quebec properly, they ignored the warning signs…

Panel 2: collapsed bridge.
Professor: …and it collapsed during construction. 75 lives lost, needlessly. Pointlessly. None of it would’ve happened if the engineers had done their jobs right.

Panel 3: picture of Doreen Green, aka Squirrel Girl, in the lecture hall, her hand on her friend Nancy. Professor (off panel): After that disaster, we began to see the power that the people who build things have over everyone’s lives, with that extraordinary power…
Doreen: Oh man Nancy here it comes

Panel 4: back of Professor’s head, facing the lecture hall. Doreen can be seen over the professor’s right shoulder.
Professor: …the extraordinary responsibility.
Doreen: Yesss!

Panel 5: A secret society’s doorway, guarded by two men in black suits.
Professor (overlaid on panel): Since that disaster, professional engineers in Canada don’t just graduate; they have to pass an ethical examination, work as an apprentice, and have character witnesses before they’re accredited. They gather in a private ceremony00in the presence of their betters and their equals–and they swear to do better”

Panel 6: Professor holding up her left hand and pointing at the ring she wears on her pinky finger.
Professor: And on their dominant hand each wears a ring made from he same sort of steel used in that collapsed bridge. With every report they write and every blueprint they sign off on, they feel the weight and drag of that steel, reminding them of their responsibilities.

Panel 7: Professor behind the podium.
Professor: When you develop software, you should feel that same responsibility Canadian engineers learned the hard way. Strangers will place their lives in the hands of you–and your software–every day. You are being trained to handle that power. Be ready.

This site uses Akismet to reduce spam. Learn how your comment data is processed.